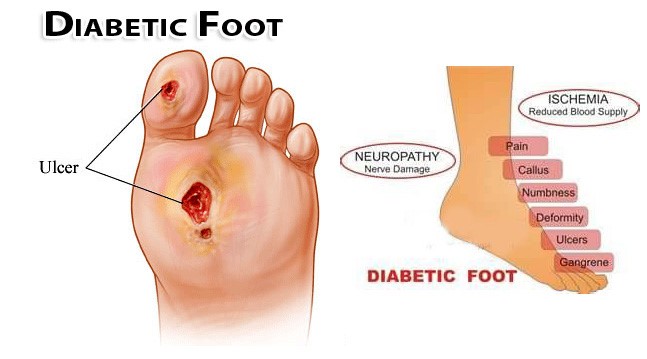 CLINICAL CONTEXT
Limb complications, including amputation, are one of the devastating consequences of diabetes. The authors of the current guidelines note that the lifetime prevalence of foot ulcers among patients with diabetes is approximately 25%, and diabetic foot ulcers (DFUs) are associated with reduced quality of life as well as a higher risk for early mortality. DFUs precede up to 85% of cases of major limb amputations among patients with diabetes.

DFUs may be classified in terms of their etiology as ischemic, neuropathic, or a combination of these 2 pathologic processes. During the past 2 decades, an increasing proportion of ulcers are classified as ischemic or neuroischemic in nature, and it is now estimated that at least 65% of DFUs have an ischemic component. Because of the high prevalence of peripheral arterial disease in this population, the American Diabetes Association recommends that all patients with diabetes receive screening with an ankle-brachial index test at age 50 years. Moreover, patients with a DFU should also receive a toe blood pressure test or a test for transcutaneous partial pressure of oxygen at the toe.

This diabetic foot guideline is the first developed by a multidisciplinary panel, which conducted separate systematic literature reviews for each of the 5 topics.

“The reality is there’s not a lot of really good level 1 evidence for treating these ulcers. That’s why we had three different specialties who are all involved in caring for these patients to put their heads together and [determine] what’s the best evidence we have to take care of this very difficult problem,” Dr Hingorani told Medscape Medical News.

Dr Ulbrecht added that although he takes issue with a few specific points, “There can be no doubt that if all care followed these guidelines, diabetic foot disease would be markedly diminished.”

The panel issued 5 recommendations for the care of the diabetic foot:

Patients with diabetes should have their feet examined at every visit, Dr Hingorani said, “because it’s such a devastating problem. If you can get it when it’s small, it’s a much smaller problem.”

Use of the old standby Semmes-Weinstein monofilament is still considered standard as a screening tool, he noted.

However, Dr Ulbrecht cautioned against spending time on patient education for those in whom no problems are detected with the monofilament, noting no evidence exists that such efforts provide benefit and may instead cause unnecessary worry.

“In fact, I tell patients with good sensation and not obviously very poor circulation to do as anyone else would. They do not need to add the burden of paying special attention to their feet to all the other burdens of diabetes.”

2. In patients with plantar diabetic foot ulcer, the panel recommends offloading with a total contact cast or irremovable fixed-ankle walking boot. For those with nonplantar wounds or healed ulcers, specific types of pressure-relieving footwear are recommended.

“The evidence for total contact casting for diabetic foot wounds is very, very strong. One of the most important recommendations is offloading and it’s one of the least utilized,” Dr Hingorani noted.

Dr Ulbrecht, who has done research on offloading, wholeheartedly agrees.

3. In patients with a new diabetic foot ulcer, the recommendation is a probe-to-bone test and plain films, followed by magnetic resonance imaging (MRI) if a soft-tissue abscess or osteomyelitis is still suspected after the probe-to-bone test.

Dr Hingorani said that there has been too much reliance on bone scans and that after probing the bone, examining the wound, and performing a simple x-ray, “the MRI is the most sensitive, specific, and accurate test….It is more expensive, but if you’re spending a lot of money on tests that aren’t accurate you’re not getting the diagnosis.”

4. Debridement is recommended for all infected ulcers, with treatment of those infections based on the 2012 guidelines published by the Infectious Diseases Society of America. The current document provides detailed recommendations on comprehensive wound care and various debridement methods.

For ulcers that do not improve by more than 50% after 4 weeks of standard wound therapy, adjunctive options are advised. The document lists several, including negative pressure therapy, various biologics, and hyperbaric oxygen therapy.

Dr Hingorani said, “There are hundreds of agents out there. We tried to establish some guidelines but couldn’t go over everything. There are no head-to-head comparisons….But the bottom line is if the wound’s not responding, you need to try a different treatment.”

In patients with foot ulcer who have peripheral arterial disease, the panel recommends revascularization by either surgical bypass or endovascular therapy.

Dr Ulbrecht took issue with the universal ankle-brachial index recommendation, noting that, although inexpensive, it does take time and does not change management.

“I would argue there’s very little you do differently. Some experts say that once you diagnose vascular disease you should be more aggressive about telling patients not to smoke, to lower their cholesterol and blood pressure, etc. But you’re doing that anyway.”

However, despite the small areas of disagreement, Dr Ulbrecht emphasized that he found “nothing egregious” in the guidelines. “This is a consensus of a bunch of people, and mine is a single opinion….Basically, it’s a very impressive document, and I fundamentally think it’s a big contribution.”

Indeed, Dr Hingorani said, “Diabetic foot ulcer is a multidisciplinary problem, and these guidelines really do highlight that.

“It’s the first time bringing multiple disciplines together to look at this problem and tackle it,” he noted, adding that the panel expects to revise and update it as new information becomes available.

Dr Hingorani and the other panel members have disclosed no relevant financial relationships. Dr Ulbrecht is a part-owner of DIApedia, a research and development company that has developed offloading orthoses for at-risk diabetes patients.

• A multidisciplinary committee, which consisted of vascular surgeons, podiatrists, and physicians with expertise in vascular medicine, created these new guidelines on diabetic foot care.

• Patients with diabetes who do not have a high risk for DFU do not require special footwear. However, patients with significant neuropathy, foot deformities, previous DFU, or previous amputation should be provided protective footwear.

• The glycated hemoglobin (HbA1c) level should be maintained at less than 7% (with strategies to prevent hypoglycemia) in order to prevent DFU and infection.

• The authors recommend against prophylactic arterial revascularization to prevent DFU.

• Patients with plantar DFU should receive a total contact cast or irremovable fixed-ankle walking boot to promote offloading. A removable cast walker may be applied in these cases if frequent dressing changes are required.

• For nonplantar DFUs, offloading should be promoted with devices such as a surgical sandal or a heel relief shoe.

• Patients with a diabetic foot infection and open wound should be assessed for possible osteomyelitis with a probe-to-bone test. This test carries a positive predictive value of 89% for osteomyelitis among high-risk patients.

• Plain radiographs of the foot should be completed in cases of suspected osteomyelitis, but the sensitivity and specificity of MRI is superior to those of radiographs.

• Patients with DFU should be monitored at least every 4 weeks for response to treatment. The goal of therapy should be a reduction in wound size of 10% to 15% per week.

• DFU dressings should maintain a moist wound bed, control exudate, and avoid maceration of surrounding intact skin. However, data are insufficient to recommend one type of dressing product vs another in the treatment of DFUs.

• Debridement of devitalized tissue around DFUs should be performed at intervals of 1 to 4 weeks, but no particular debridement technique is superior to others.

• DFUs that do not improve with a reduction of at least 50% of the wound area after 4 weeks should be managed with more advanced treatments, including negative pressure therapy, biologics, and hyperbaric oxygen therapy.

• Patients with plantar DFU should receive a total contact cast or irremovable fixed-ankle walking boot to promote offloading, and DFU should be evaluated for healing at least every 4 weeks. Patients with a diabetic foot infection and open wound should be assessed for possible osteomyelitis with a probe-to-bone test. There is insufficient evidence to recommend one type of wound dressing vs another, provided that they maintain a moist wound bed and control exudate.

• Implications for the Healthcare Team: The best treatment for DFUs is prevention through educating patients with diabetes about foot care. The healthcare team should facilitate regular examination of the feet. If DFU develops, the team should ensure routine short-term follow-up and step up care for cases that fail to respond to therapy.