Loading ...
You are here:
Nurses Zone | Source of Resources for Nurses » Laboratory and Diagonistic Test » Nursing Responsibilities during Breast Biopsy 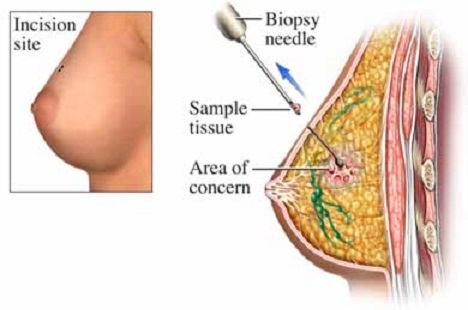 Nursing Implications
• Anticipate the need for additional testing.
• Provide emotional support to the patient during this period.

Purpose
• To differentiate between benign and malignant breast tumors


Description
Breast biopsy is performed to confirm or rule out breast cancer after clinical examination, mammography, or
thermography has identified a mass. Common techniques include fine-needle or needle biopsy (performed when
a patient has a fluid-filled mass that’s been identified by ultrasonography) and open biopsy (performed to allow access to the complete tissue system, which can be sectioned to allow more accurate
evaluation). In some cases, stereotactic breast biopsy may be used. This involves immobilizing the breast and allowing a computer to calculate the exact location of the mass based on x-rays from two angles.
A breast biopsy can usually be done on an outpatient basis under local anesthesia; however, an excisional open
biopsy may require general anesthesia. If sufficient tissue is obtained and the mass is found to be a malignant tumor, specimens are sent for estrogen and progesterone receptor assays to assist in determining future therapy and the prognosis.
The usual procedures for needle and open biopsies are as follows:

Needle Biopsy
• The patient is instructed to undress to the waist, and is placed in a sitting or recumbent position with her arms
at her sides.
• The biopsy site is prepared, a local anesthetic is administered, and the syringe (luer-lock syringe for aspiration, Vim-Silverman needle for tissue specimen) is introduced into the lesion.
• Fluid aspirated from the breast is expelled into a properly labeled, heparinized tube; the tissue specimen is placed in a labeled specimen bottle containing normal saline solution or formalin. With fine needle aspiration, a slide is made for cytology and viewed immediately under a microscope. (Because breast fluid aspiration isn’t considered diagnostically accurate, some practitioners aspirate fluid only from cysts. If such fluid is clear yellow and the mass disappears, the aspiration procedure is diagnostic and therapeutic, and the aspirate is discarded. If aspiration yields no fluid or if the lesion recurs two or three times, an open biopsy is then considered appropriate.)
• Pressure is exerted on the biopsy site and, after bleeding stops, an adhesive bandage is applied.

Open Biopsy
• After the patient receives a general or local anesthetic, an incision is made in the breast to expose the
mass.
• The practitioner may then incise a portion of tissue or excise the entire mass. If the mass is smaller
than ¾” (2 cm) in diameter and appears benign, it’s usually excised; if it’s larger or appears malignant, a
specimen is usually incised before the mass is excised. Incisional biopsy generally provides an adequate specimen for histologic analysis.
• The specimen is placed in a properly labeled specimen bottle containing 10% formalin solution. Tissue that appears malignant is sent for frozen section and receptor assays. Receptor assay specimens must not be placed
in the formalin solution.
• The wound is sutured and an adhesive bandage applied.
Because breast cancer remains the most prevalent cancer in women, genetic researchers are continually working to identify women at risk.

Precautions
• Breast biopsy is contraindicated in the patient with a condition that precludes surgery.

Nursing Considerations(Responsibilities)
Before the Test
• Confirm the patient’s identity using two patient identifiers according to facility policy.
• Describe the procedure to the patient, and explain that breast biopsy permits microscopic examination of a breast tissue specimen. Offer her emotional support, and assure her that breast masses don’t always indicate cancer.
• Inform the patient scheduled for a needle biopsy that she’ll need to sit still during the procedure.
• If the patient is to receive a local anesthetic, advise her that she doesn’t need to restrict food, fluids, and medication. If she’s to receive a general anesthetic, advise her to fast from midnight before the procedure until after the biopsy.
• Tell the patient who will perform the biopsy, and where and when it will be done. Explain that pretest studies, such as blood tests, urine tests, and chest X-rays, may be required.
• Make sure the patient or a responsible family member has signed an informed consent form.
• Check the patient’s history for hypersensitivity to anesthetics.

During the Test
• Remind the patient undergoing a needle biopsy to sit still.
• Assist with the collection of specimens into the appropriate containers,if indicated.
• Send the specimens to the laboratory immediately, if appropriate.


After the Test
• If the patient has received a general or local anesthetic, monitor the patient’s vital signs regularly. If she
has received a general anesthetic, check her vital signs every 15 minutes for 1 hour, every 30 minutes for 2 hours, every hour for the next 4 hours, and then every 4 hours.
• Administer analgesics for pain, as ordered, and provide ice bags for comfort.
• Instruct the patient to wear a support bra at all times until healing is complete.
• Observe for and report bleeding, tenderness, and redness at the biopsy site.
• Provide emotional support to the patient awaiting diagnosis.