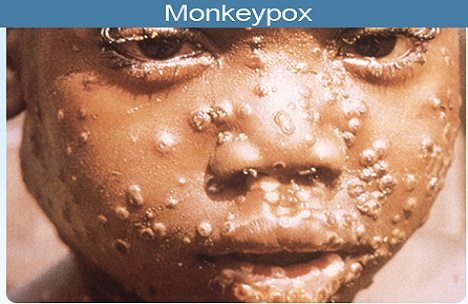 Monkeypox is a rare viral zoonosis (a virus transmitted to humans from animals) with symptoms in humans similar to those seen in the past in smallpox patients, although less severe. Smallpox was eradicated in 1980.However, monkeypox still occurs sporadically in some parts of Africa.

Monkeypox is a member of the Orthopoxvirus genus in the family Poxviridae.

The virus was first identified in the State Serum Institute in Copenhagen, Denmark, in 1958 during an investigation into a pox-like disease among monkeys.

In the spring of 2003, monkeypox cases were confirmed in the Midwest of the United States of America, marking the first reported occurrence of the disease outside of the African continent. Most of the patients had had close contact with pet prairie dogs.

In 2005, a monkeypox outbreak occurred in Unity, Sudan and sporadic cases have been reported from other parts of Africa. In 2009, an outreach campaign among refugees from the Democratic Republic of Congo into the Republic of Congo identified and confirmed two cases of monkeypox. Between August and October 2016, a monkeypox outbreak in the Central African Republic was contained with 26 cases and two deaths.

Transmission
Infection of index cases results from direct contact with the blood, bodily fluids, or cutaneous or mucosal lesions of infected animals. In Africa human infections have been documented through the handling of infected monkeys, Gambian giant rats and squirrels, with rodents being the major reservoir of the virus. Eating inadequately cooked meat of infected animals is a possible risk factor.

Secondary, or human-to-human, transmission can result from close contact with infected respiratory tract secretions, skin lesions of an infected person or objects recently contaminated by patient fluids or lesion materials. Transmission occurs primarily via droplet respiratory particles usually requiring prolonged face-to-face contact, which puts household members of active cases at greater risk of infection. Transmission can also occur by inoculation or via the placenta (congenital monkeypox). There is no evidence, to date, that person-to-person transmission alone can sustain monkeypox infections in the human population.

In recent animal studies of the prairie dog-human monkeypox model, two distinct clades of the virus were identified – the Congo Basin and the West African clades – with the former found to be more virulent.


Signs and symptoms
The incubation period (interval from infection to onset of symptoms) of monkeypox is usually from 6 to 16 days but can range from 5 to 21 days.

The infection can be divided into two periods:

i. the invasion period (0-5 days) characterized by fever, intense headache, lymphadenopathy (swelling of the lymph node), back pain, myalgia (muscle ache) and an intense asthenia (lack of energy);
ii. the skin eruption period (within 1-3 days after appearance of fever) where the various stages of the rash appears, often beginning on the face and then spreading elsewhere on the body. The face (in 95% of cases), and palms of the hands and soles of the feet (75%) are most affected. Evolution of the rash from maculopapules (lesions with a flat bases) to vesicles (small fluid-filled blisters), pustules, followed by crusts occurs in approximately 10 days. Three weeks might be necessary before the complete disappearance of the crusts.

The number of the lesions varies from a few to several thousand, affecting oral mucous membranes (in 70% of cases), genitalia (30%), and conjunctivae (eyelid) (20%), as well as the cornea (eyeball).

Some patients develop severe lymphadenopathy (swollen lymph nodes) before the appearance of the rash, which is a distinctive feature of monkeypox compared to other similar diseases.

Monkeypox is usually a self-limited disease with the symptoms lasting from 14 to 21 days. Severe cases occur more commonly among children and are related to the extent of virus exposure, patient health status and severity of complications.

People living in or near the forested areas may have indirect or low-level exposure to infected animals, possibly leading to subclinical (asymptomatic) infection.

The case fatality has varied widely between epidemics but has been less than 10% in documented events, mostly among young children. In general, younger age-groups appear to be more susceptible to monkeypox.


CLICK HERE for more resources on Fundamentals of Nursing
Diagnosis
The differential diagnoses that must be considered include other rash illnesses, such as, smallpox, chickenpox, measles, bacterial skin infections, scabies, syphilis, and medication-associated allergies. Lymphadenopathy during the prodromal stage of illness can be a clinical feature to distinguish it from smallpox.

Monkeypox can only be diagnosed definitively in the laboratory where the virus can be identified by a number of different tests:

Treatment and vaccine
There are no specific treatments or vaccines available for monkeypox infection, but outbreaks can be controlled. Vaccination against smallpox has been proven to be 85% effective in preventing monkeypox in the past but the vaccine is no longer available to the general public after it was discontinued following global smallpox eradication. Nevertheless, prior smallpox vaccination will likely result in a milder disease course.

Natural host of monkeypox virus
In Africa, monkeypox infection has been found in many animal species: rope squirrels, tree squirrels, Gambian rats, striped mice, dormice and primates. Doubts persist on the natural history of the virus and further studies are needed to identify the exact reservoir of the monkeypox virus and how it is maintained in nature.

In the USA, the virus is thought to have been transmitted from African animals to a number of susceptible non-African species (like prairie dogs) with which they were co-housed.

Prevention
Preventing monkeypox expansion through restrictions on animal trade
Restricting or banning the movement of small African mammals and monkeys may be effective in slowing the expansion of the virus outside Africa.

Reducing the risk of infection in people
During human monkeypox outbreaks, close contact with other patients is the most significant risk factor for monkeypox virus infection. In the absence of specific treatment or vaccine, the only way to reduce infection in people is by raising awareness of the risk factors and educating people about the measures they can take to reduce exposure to the virus. Surveillance measures and rapid identification of new cases is critical for outbreak containment.

Public health educational messages should focus on the following risks:

Healthcare workers and those treating or exposed to patients with monkeypox or their samples should consider being immunized against smallpox via their national health authorities. Older smallpox vaccines should not be administered to people with comprised immune systems.

Samples taken from people and animals with suspected monkeypox virus infection should be handled by trained staff working in suitably equipped laboratories.